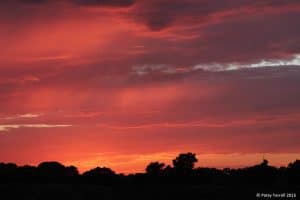 This day has been spent working around the house on the typical computer projects, but also on a couple of other projects I’ve put off far too long. I can spend more time dreading doing something than it would take to just do it. I’m not sure why I do that. It’s not like I’m unaware of it, but nonetheless, it happens.

At dusk I went out for some dinner and then decided to drive out and see if I could get a nice sunset photo. It had sprinkled rain a couple of times so I thought the moisture in the air might give us a pretty sunset. It was nicely intense.

As I was coming back into town, I drove past a bull calf in a fence row, not with the rest of the herd on the other side of the fence. I started to stop at a nearby house, but then got concerned he might get on the road. So, I turned around and went back to where I could see him. I looked for a gate but didn’t see one.

The calf was going up and down the fence, sticking his head through here and there. Not knowing what else to do, I called 911 and asked them to send a deputy. I was afraid to leave him because I didn’t want him to get on the road. Only once did he move that direction, but it was getting dark and I thought that was a disaster in the making.

So, I turned around, back and forth, to keep him in my headlights. Eventually I was just sitting in the road, my hazards on, watching him, when the Sheriff’s Deputy arrived. He pulled up beside me and we were watching the calf. Then, as we’re talking, the calf finds the spot and jumps back into the field. So, problem solved.

Except, of course, the calf can come and go as he pleases, apparently. I don’t know if his people know that. But I don’t know who his people are, so I can’t help with that.

I had hoped one of the half dozen or so cars that went by would stop. I thought maybe they would know who owned the herd. But, for the first time ever, no one stopped. I’m really puzzled by that.

But, at least for that moment, the calf was back with the herd. No one driving by was going to hit him in the dark, which would have been bad for human and calf. No one was going to lose a chunk of their livelihood.

I’m not sure how my days get weird, but they do.