“Are you from here?” 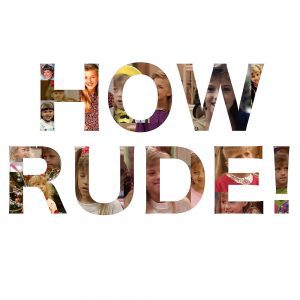 It’s a question I hear all the time and one I despise. Most recently I heard it at an antique store in Newton, Kansas, and it wasn’t asked of me. It was just as obnoxious when it was directed to someone else.

If you are someone who asks that question, stop it. It’s rude.

Rarely is anyone as bold as the proprietor at this antique mall who followed up the person’s answer of, “We live in Wichita,” with, “Well, most people here would prefer to use someone local.”

There’s so much wrong with this attitude it’s hard for me to believe I need to state it, but apparently I do.

1. Wichita is about 20 minutes by car from Newton. Considering I can talk to someone who lives a 14 hour plane ride away from me in real time, twenty minutes in a car IS “local.” Stop showing your ignorance. (Why do ignorance and rudeness so often go together?)

2. How do you know what other people want? Who appointed you the arbiter of the choices the entire population of Newton may want to make? Despite what you may believe in your own mind, try to let a little reality in, and realize you are not the Queen.

3. You might as well just say to someone, “You weren’t born here? Well, then, you’re obviously trash. None of the good, God-fearing people here are going to want to even breathe the same air as you. Move along. We don’t need your kind.” In case it’s not clear, this is rude.

For years I have talked about what I call, “The Midwest Mindset.” It was summed up beautifully by another transplant some years ago when she said, “Everyone is friendly, but no one wants to be your friend.”

I’ve lived in Kansas a long time, but I will never be “from” here because I was born and raised elsewhere. I’ve been fortunate enough to build a wonderful circle of friends, but it has not been easy. It has taken considerable effort on my part to find the willing souls, and the vast majority of them are not originally from Kansas and/or have lived in other places for extended periods of time.

The attitude behind this question is the reason people who move to your town don’t stay long and that kids who come there to college realize they’ll need to move somewhere else to ever be accepted. It’s at the root of the “brain drain” people are so fond of talking about.