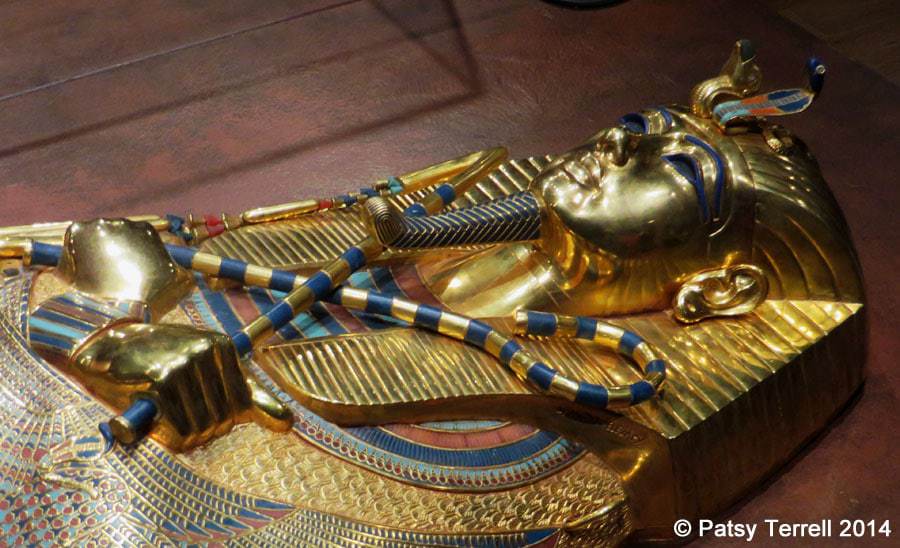 When I first learned about mummies in second grade, I was hooked. There was no going back. My fascination with Ancient Egypt began that day, and continues still. I’ve even tried to teach myself Egyptian hieroglyphics, but haven’t been successful yet.

A few years ago I got to spend almost a month in Egypt. Many of those hours were spent in the Egyptian Museum in Cairo, and a number of those in the King Tut exhibit. Although some of the items have toured, it’s rare for them to leave Egypt, and the iconic items never leave Cairo.

The exhibit at Union Station in Kansas City, “The Discovery of King Tut,” is all reproductions, but they are exceptional ones. They’ve done something fantastic with them that simply isn’t possible with the actual artifacts.

When you enter the exhibit, you are given an audio tour and it’s really well done. There’s a short movie that gives an overview of the discovery of the tomb in the early 20th century. Then you enter an exhibit area where they’ve recreated the scene Howard Carter saw when he first put his eye up to the small hole he had made and said he saw, “Wonderful things.”

Although I had seen photographs of the scene as it was that day, it was different to see it in 3D. They present it in a way that gives a sense of the wonder Carter must have felt when he found what he had spent 15 years seeking.

Kansas City is its American premiere and the exhibit is there through September 7, with open hours every day of the week. If you have an interest in Ancient Egypt, you’ll enjoy seeing these items up close. If you want to learn, or just to marvel at the beauty, this is a great way to spend some time.

Earlier this summer, Antiquities expert Zahi Hawass gave a presentation at Union Station. I was so honored to be able to attend and hear him speak about the discoveries made during his years as the Minister of State for Antiquities Affairs in Egypt. He is perhaps the world’s most well-known archaeologist. I’m so thankful to my friend Ben Smith for making it possible for me to go. I am still enjoying the book I purchased that night, reading it a little at a time to make it last.

The Discovery of King Tut is well worth your time and you’ll be glad you visited!