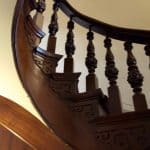 Driving around the other day, “In the Dark” by Billy Squier came on the radio. Instantly, I was transported back to sitting on the floor of my college apartment with a boy. We were looking at my records. (Yes, this was back when we had vinyl, and it wasn’t retro.)

He pulled out that album, looked at me and said, “I never would have taken you for a Billy Squier fan.” I wasn’t smart enough at the time to ask him why. I wish I had.

It has happened many times since, maybe because I’ve become more willing to show myself to the world as the years have advanced. But it seems the world still doesn’t quite know what to do with me. For some reason, I’m not supposed to sing along to both “Stroke Me” and “The Way we Were.”

I suppose when you don’t easily fit into a category, it makes things more difficult. People have to create a category for you instead of just filing you away under a convenient, tidy one they already have set up.

None of that mattered to this boy. He probably has no memory of that moment, but I think of him every time I hear a song from that album. Funny how our brains work, but those things are forever linked in my head.