Today the Supreme Court of the United States (SCOTUS) began hearing arguments that will affect gay marriage in the US. This issue is multi-layered and people have many strongly held beliefs about it.

For me it’s simple. I am a proponent of all rights, for all people.

This is the civil rights issue of our era. Marriage equality might not have been the exact issue I would have chosen, but that’s not how these things work. We take our opportunities where they exist.

The civil rights movement of the 50s and 60s gained power when people who were not directly affected by the proposals showed their support. The same is true now. History will judge our generation just as it judges those of decades ago. If you don’t want to be remembered like Bull Conner, get on the right side of this issue.

Interestingly enough, surveys show that this is an issue strongly divided by age. Largely anyone under 30 doesn’t understand why we’re even having this discussion. Over 30 it’s more divided along political lines.

I know there are people who feel very differently about the issue than I do. We had a very divisive vote here last fall about equality for gay people in housing and hiring and it failed. It wasn’t even about gay marriage. I expected it to pass. I was shocked it didn’t. I know very few people who don’t support fairness. I realize my perspective is skewed.

I’m stunned when people still choose to live in the closet, although it’s certainly their choice to make. I was telling some friends recently about meeting a woman and she was telling me she was in business with a female friend. I kept chatting with her about one thing and another, and questioning her about how they had managed to stay such good friends for so many years. The next day it occurred to me, “Oh! they’re a couple!”

She just kept referring to her as “a good friend,” so I kept trying to understand this decades long relationship that involved owning a business together and living together. I know that makes me dense, but it just didn’t occur to me that someone would refer to their partner as a friend. Obviously, that’s their choice. But you have to understand if you make that choice, that people like me are going to bumble along not getting it until much later because it doesn’t compute in our brains. It doesn’t have to, and everyone must do what’s best for them.

But the fact that those ladies, who’ve been together for decades, can’t be married if they want to, seems insane to me. I’m not being flippant. I truly just don’t understand it.

When I hear someone talk about the sanctity of marriage, I honestly have to consciously keep from laughing. It is heterosexual people who have created a divorce rate that’s currently about 45%.

I’ve heard the religious arguments, but I believe using the Bible to justify almost anything is a false argument. After all, it does command us to manage our slaves well and to obey the laws of the land. Doing both of those simultaneously is impossible. Therefore, no one is following all the teachings of the Bible and that means we all get to pick and choose – not just the people sitting in church. Besides, a woman who has ever cut her hair – or a man who has allowed his wife to do such a thing – is not faithful to Biblical teachings, so why would they dream they could use the Bible as an argument? If they’re not living by its teachings I don’t know why they presume others should do so. This, of course, assumes you believe the Bible speaks about homosexuality or any other topic.

I have rather traditional religious views myself. I respect people’s right to believe as they wish. But if they make the Bible their argument, I believe I am entitled to question the validity of that argument when they’re not following it themselves. And it’s essentially impossible to do that. 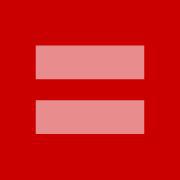 The red and pink equal sign symbol showing support for marriage equality proliferated on people’s Facebook profiles today, mine included. It raised some interesting discussions, including one about if putting that on your profile was accomplishing anything or not.

This was posted by a friend:
You know that red “marriage equality” sign on your Facebook profile is completely useless, right? http://bit.ly/10c1B2I

“Yes, the show of support is heartwarming, but you’re not doing anything. This is just another form of passive activism that isn’t advancing the cause. Do you know what would be helpful? Actually picking up a sign, heading down to the Supreme Court, and joining the throngs of protesters. Do you know what would be useful? Instead of just downloading an image and clicking a few buttons, going to the website of a gay rights organization (or any gay organization for that matter) and giving them some money so they can fight for gay civil rights on your behalf. “

I posted:
Some of us can’t trot down to the supreme court, but we do what we can in our own communities, and sometimes that comes with risks that people who don’t live in the Bible belt may not fully comprehend. Why would anyone assume because we are showing support in this manner that it’s all we’re doing? That’s offensive. I think a solid argument could be made that people’s Facebook pages turning half red for the day, makes more of an impact on the average person’s viewpoint than people holding signs at the Supreme Court. People are more affected by people they know than any other thing. In the community where I live, where we had an incredibly divisive vote a few months ago about a related topic, these things to do matter to people because it’s a visible support.

We had a lengthy and interesting discussion about if it mattered. In the midst of it another friend, who is gay, posted: “just wants to say thanks. It’s only a Facebook profile photo. Or is it?”

Does it matter? I don’t know. I’m guessing it matters to some people, like my friend who posted this. To others it’s probably offensive because it’s not something more.

I think it’s another tool, and a simple way for people to show their support. Most people are never going to go to the supreme court and protest, but millions of people may show their support with a simple thing like this. They can all vote.

Regardless, I am certain that marriage equality is coming. It won’t be here right away, but it’s coming. I expect to be invited to a number of weddings when it does arrive.

I am also certain that being in favor of more rights for more people is always best.