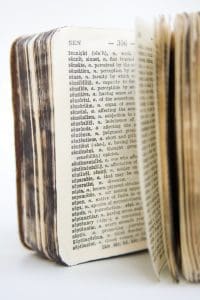 Old Dictionary, pages with words, short DOF shot in RAW with 4x Closeup Filter, this thing is only like 2″ tall, used to be my mum’s and it later had a distressing time while I burned it with a magnifying glass as a kid 😀

It always makes me smile when I hear the word, “milieu,” and I heard it in conversation last night. This word and I have a “history” one might say.

I was introduced to the word in college, when I read it in some research I was doing for a paper. The paper was in a class where the teacher and I were not on the best of terms. We got off on the wrong foot on day one when he was rude (to my way of thinking) to the freshmen and sophomores in this upper level class, and I called him on it. Was that my fight? No. But I made it mine. Was that wise? Maybe not. But I did it anyway.

I have always had this idea that things should be fair to everyone and it wasn’t his decision about whether or not people should take his class, it was theirs. I pointed that out – in class. It might have been better to leave it alone or to have that coversation privately, but I didn’t. Maybe that was a lack of maturity on my part. Or maybe it was on his. For whatever reason, we didn’t start the semester on the best terms and things went downhill from there.

A few weeks later I turned in a paper, using a quote with the word “milieu” in it. He circled it in red pencil and drew a line out to the side and wrote, “Do you even know what this word means?” The words were indented from the pressure he used.

I could barely sit in my seat until class was over. I bounded up to his desk afterwards, jabbed my finger at his comment on the page, and said, “milieu refers to the environment in which a person or event exists.” He was dumbfounded and I felt triumphant. I didn’t bother to tell him I only knew the word because I had looked it up in the dictionary when I read that quote – probably only hours before turning in the paper. (This, my children, was when we had to look things up in these large paper books called dictionaries. Keyboards were on typewriters, with erasers and wite-out nearby.)

It was the perfect word. I never hear it or use it without thinking of that brash college student, or that college professor no doubt weary from decades of dealing with brash – and one might rightfully argue – obnoxious college students.