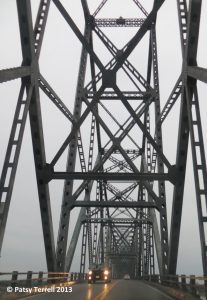 It’s amazing how often we get just what we need, right when we need it. It’s also amazing how often we don’t even notice it when it happens. I was recently reminded of why it’s important to note such things, and be grateful for them. In this case it even came with an alert to pay attention.

The last few days have been a whirlwind of activity. Thursday night we went to see David Sedaris, which was amazing. Then on Friday I was in Newton all day for a conference. I left there and headed to Kansas City for Planet Comicon.

After being at the comicon on Saturday, I decided to forgo Sunday and head back early. I had lunch with a friend and then hit the road. I was driving along, as we do sometimes, thinking about other things, when I realized I was somewhere between Topeka and Manhattan and didn’t remember the details of how I got there.

What brought me to my senses was an alarm on my car. It was a low fuel warning, with no towns in sight. I had no sense of how long ago it had been since I last passed a gas station. I looked at the mile marker and realized I was about 40 miles from an exit where I knew there was a gas station. I looked at the readout and saw it estimated I could go another 23 miles before running out of gas.

Before I even had time to process this information enough to worry, I spotted a blue sign that indicated a gas station at the next exit. I’ve driven by that station many times, but never paid attention to it because I didn’t have a need. Sunday, when I had an immediate need, there it was, as if on cue.

It was a reminder to me to pay attention, and to not depend on alarms. It also reminded me to be thankful for the blessings of being provided for – just what I needed, right when I needed it.