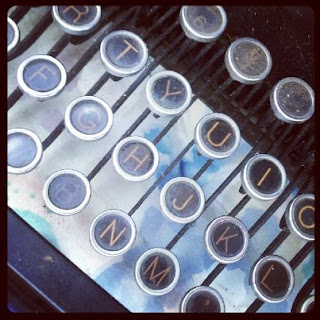 This is my latest purchase – Royal Typewriter, probably made in the 1930s. I asked on Facebook if anyone had one and a friend did. Her husband brought it into town, I forked over a $20, transaction completed.

Someone on Twitter asked if I was going “old school.” In reality, I want it for an art project.

But, these things never go quite as smoothly as one might hope.

I just drove straight to Gary’s Office Machines, which I had called yesterday to ask about ribbons. He nicely came out and got it out of the car (it’s heavy!), took it in, and determined there were no spools in there. Apparently they can wind a new ribbon onto the old spools, (think cassette tapes and pencils) but we need the spools. So, I’m on the hunt…

I have a couple of places to check out that I didn’t have time to connect with yet. Until then, it’s just riding around in my car seat. I see no point in carrying it inside until I’ve located the necessary items.

It will work. Eventually. Just not today.