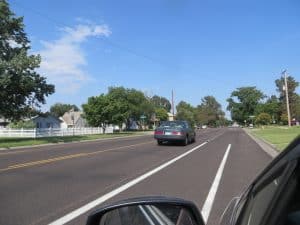 When my mom died, my brothers suggested I take her car. I had just purchased a used van, and they both told me the car would get better mileage and it would be a good thing for me to do. As is so often the case, the brothers were right, and I’m glad I listened to them.

It was a great car and served me well for the last few years. However a year and a half ago it developed a problem that made it unsafe for long highway trips, which I do a lot of. So, I got a new car and this one was without a home.

I hated to just salvage it because it still ran quite nicely for in-town driving. I looked into donating it but discovered most of those things are just resell places and no one is really getting the benefit of the car. The value of it to the dealership when I got the new car was so small it wasn’t worth it.

But, as these things sometimes do, it started to become a liability. It became ridiculous to be paying insurance on something I wasn’t driving at all. I was getting ready to donate it, and then someone in my circle mentioned they needed to find a car.

So, a few days ago I transferred the title, and gave it away. This is the second time I’ve given away a car I couldn’t use anymore, but that still had some miles left in it. Of course, I don’t know how many miles – could be 5, could be 5,000, could be 50,000. In both cases, they weren’t worth anything to sell, but were worth something to someone who needed a vehicle.

I took a photo of it being driven away because it’s the end of an era. It was something very tangible that belonged to my mom. I’m incredibly sentimental about everything. But, it was not doing anyone any good sitting in a driveway and hopefully someone will get some use of it now.

I just gave it as a gift, so there can be no outrage if it develops a new issue that makes it not usable. I was very honest about its problems. It seemed like the right thing to do, to pass it on. I think my mom would approve. I was willing to spend the time it took to do that instead of just junking it. I hope it serves well far into the future!