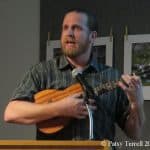 I’m passionate about connecting people and ideas, and that often happens through story. In fact, almost everything I do in my personal and professional life is about building connections. I’m certain this is how we make the world better,

One of the things I’ve been a part of creating that exemplifies community connection is Talk20 Hutch. We just had our fourth installment Friday night and it was spectacular, as always.

The concept is that 10 people tell a story using 20 photos and each one is shown for 20 seconds. The slides are on a timer and just keep going, so the presenters have to, too. Each presentation is a little over six minutes.

This is a community project a friend, Kari, and I started. Actually, we weren’t friends when it began – we didn’t even know each other. But a mutual friend, Kate, thought we should, and asked us both to get together and meet. Kate wasn’t in town, so Kari and I met on our own. I’m always thrilled to do that. In fact, it’s how I first met Kate. She said people kept telling her that she should get to know me and she asked if I’d meet her for coffee. It was great to connect with her and it was great to connect with Kari through her a few years later.

Anyway, over coffee, Kari was telling me various ideas she had for things she’d like to see in Hutchinson. One of them was Talk20. She had been a presenter where she had lived before moving back to Hutchinson. As soon as she explained the concept, I said, “Oh! I love that! We should do that, and we should do it at the library!” I was excited by the possibilities.

Well, things went along for a few months with both of us thinking about potential presenters and Kari, who had just moved here when we first met got settled in. She messaged she was ready to proceed. I asked the director at the library to meet with us. Kari asked if I thought he would be willing. I replied I was 99.99% sure. We explained to Gregg what we wanted to do and with no hesitation he said, “Yes! Lets do it!”

So, we began planning. That was in October, 2013. We did our first Talk20 in January, 2014. We expected 75-100 people. We had about 150. People were standing in the auditorium hallway, sitting on the floor and leaning on the walls. But people stayed. Because hearing people talk about their passion is intoxicating. Forty people have now stepped up to the microphone and shared their story. 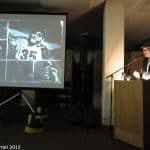 The next time we moved downstairs for more room. The library rented chairs, a screen, a sound system, etc. We simply could not have done it without their generous support.

The fact that Talk20 Hutch exists is a testament to the power of connection. In addition to all the library does, downtown Hutchinson has supplied gift certificates, and my friend, Greg, has recorded all the presentations so they’re available for viewing on the website later. We have a core group of vocal supporters who help spread the word, and The Hutchinson News has been very generous with pre and post stories each time.

Although it’s a tiny ripple, by creating this community event, it has created business for others. Not only does the library rent equipment to make it possible, but we have an after party each time, creating a situation where people are gathering and buying food and drink. Most of all, we’re giving people the opportunity to make more connections with community members by attending. There’s a magic about that.

People often ask who’s putting Talk20 on, and the truth is that it’s Kari and me who are organizing the night and Gregg who is making it possible for it to happen. Talk20 has no budget – it’s the lamp from my desk that illuminates the podium and Kari’s laptop that’s running the presentations. This is a labor of love. The library is making it all possible from the chair people are sitting in to the screen they’re watching.

Talk20 is an example of what can be done when ideas and people connect. But it has to start somewhere. If Kari and I hadn’t both been open to meeting someone new at the suggestion of a mutual friend, this wouldn’t have come to be. And if we hadn’t taken action beyond that it would have just been a nice chat over coffee.

You have ideas and people that need connection, too. They’re waiting for you to build those bridges.

I’m so thankful for the talent, time, energy, enthusiasm and connection of all the folks who’ve made Talk20 happen!