The We Kan Conference is sponsored by the Kansas Sampler Foundation, an organization we are blessed to have in Kansas. For those of you who don’t live in Kansas, it will be hard to explain all they do. But they are devoted to sustaining and preserving rural culture. “They” in this case is two people, who work tirelessly.

The conference was a day and a half long. The first afternoon was a “geek out” session, which I was thrilled to be invited to participate in presenting. Kevin Case from the Inman, Kansas, school district did a magnificent job of presenting great technology ideas people could use. I filled in a bit here and there, particularly with social media questions.

The big take away of the day for most people was todaysmeet.com. It’s a way to communicate with your audience in real time when you’re doing a presentation. It’s something I suspect I will use in the future. 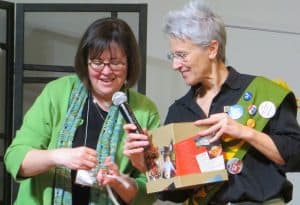 One of the funniest moments of the day for me was after everyone was gone except me and a couple of guys who run a technology company. Our entire conversation was about all the things we didn’t know that we picked up that day – it wasn’t a long list for any of us, but we all had a couple of things. I guess it doesn’t matter how “techie” you are, there’s always something to learn. Probably because hundreds of new things – make that thousands – are invented every day. It’s just not possible for people to understand them all as they happen. At least that’s the story we all decided to go with.

Wednesday was a full day of the conference and brought people from all over the state. It was great to visit with people I’d met before and to connect with new, interesting people. Everyone in that room has an interest in encouraging tourism and other development in Kansas. It’s an exciting, invigorating space to be in.

The afternoon was devoted to “speed sessions,” that were somewhat like speed dating. There were about 25 different “experts” who were at tables with five seats at each one. Everyone had four rotations to go visit with the experts and get specific questions answered. I was the social media person. It was good to be able to help people with things that were stumping them.

One of the more interesting conversations was with a woman who asked how to use social media to get young people excited about committing to activities in their communities. I talked with her about how that wasn’t a social media change, but a cultural change. I challenged her to consider that young people are very committed to things they’re interested in and that communities have to change what they do to encourage young people to be involved. I suggested just asking them. I mentioned a zombie walk as an example of something that might engage some folks that wouldn’t otherwise be involved in the typical community event. I think we made some progress along those lines in our 15 minutes. Social media is just a tool for communications, but it isn’t a magic fix for anything that ails a community. 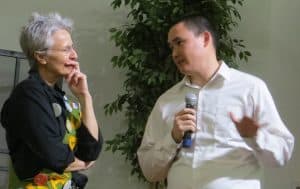 At the end of the day, the Kansas Sampler Foundation premiered a project they’ve been working on called KanStarter. It’s an amazing idea and I’ll just let you watch the video so you get a sense of it yourself. This is just one of the incredible things that has come out of the mind of Marci Penner!

Never has a state been blessed with such a cheerleader as Kansas has in Marci. The Sampler Foundation is funded by donations, memberships and other money. They are not funded by the state tourism department, but are an independent organization.

Marci and WenDee, the assistant director/gal Friday/couldn’t do it without her, are always positive and upbeat, and they do not ask for the support they need and deserve. If you have ever picked up one of their guidebooks, or looked at a small town with new eyes, or discovered a wonderful little restaurant in an out of the way place in Kansas, you’ve been touched by the Kansas Sampler Foundation. Yes, you may have read about that shop in a newspaper or you may have just stumbled upon that restaurant by accident. But I’m here to tell you it was no accident.

They have changed the way people think about exploring Kansas. It is because of them that people are even considering that readers and viewers might want to know about small towns and what they offer. It is only because of their work that some of those small towns are still on the map. They get people to believe in what they can do in their small towns and then help them do it. They have affected not only the individual shop owner, but the collective psyche of the state. And they’ve done it all out of sheer love, force of will, and a determination most of us can only marvel at.

If you’re not a Kansas Explorer, go change that right this minute. It’s $18.61 (Kansas became a state in 1861) and if you can afford the internet you’re reading this on, you can afford that. When they ask people who are explorers to stand at these events, I’m shocked at how many people are not members. These are people who benefit from the work of the Kansas Sampler Foundation in meaningful ways, who are not financially supporting it. Everything takes money. We have a treasure in Kansas and it needs our support.

I hope the next time I’m at an event and they ask explorers to stand up, the only people who will still be sitting are those who are new to the state and haven’t yet heard about thing incredibly cool thing. And I’m sure those people will be reaching for their credit cards, cash or checks to join. If there are people still sitting the next time, I may just have to start going to them one by one and asking them why they’re not members and giving them a gentle, but insistent, bonk on the head until they see reason. None of us wants that, so go do your part. Right this minute!