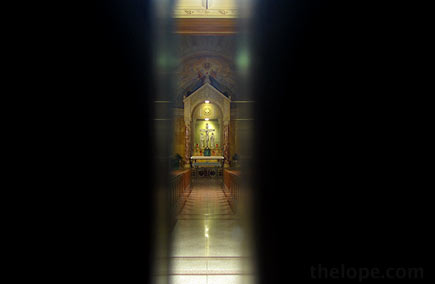 After Patsy finally settled into a deep sleep Wednesday night I went exploring and found there was a 1947 chapel literally hidden in the center of Via Christi, having been surrounded and dwarfed on all sides by subsequent expansions.

It’s called the Chapel of the Sorrowful Mother. Do you feel guilty just reading that name? I almost do, and I’m not even Catholic.

It was locked when I took this picture at 3 AM, but it’s amazing what you can see through a crack in the door. I have since been able to enter and will post pictures on thelope when I get the time.

Dawn painted the walls of Via Christi Thursday morning. I went over to the motel for five hours of sleep at about 10AM. Sharon and I seem to have settled into a routine; I sleep a few hours in the late morning to mid-afternoon and she sleeps from about 11 PM to 6 AM.

Patsy’s friend Barbara Robinson (left) stopped by and brought her friend Mary Bruce. Patsy shot this picture, her first since arriving here. It was a slow day for visitors, which was just as well because she was nauseous most of the day – not exactly a great social mode.

She got better in the late evening and walked the halls quite a bit. At about 2AM Friday she ate some apple sauce with no ill effects. She woke up a couple times during the night and we go out for “walkies. It’s 4:15 AM now and she’s watching TV – catching up on what Obama has been up to. She’s more “herself” – a cautious sign that today’s dawn will bring a better day.